As a father of four-month old twins, I’m thankful every day for modern technology that helps us raise these miniature humans. Video monitors, portable bassinets, heck, even disposable diapers…I can’t imagine how they do it in third-world countries or even America, say, 100 years ago.

Still, could it be easier? Yes. There are things that should exist but don’t. All parents who’ve survived the baby stage can relate to the sheer madness of a fussy baby who won’t stop crying. But with multiples, it’s literally Whac-a-mole. Oftentimes, as soon as you get one fed and settled, the other one’s head pops up — screaming at a decibel level exceeding a jet engine, for someone, apparently in China, to come rescue her.

So, with that in mind, I give you my top five baby care items that need to be invented…

This is NOT what I'm talking about.

1) The third arm. Granted, there actually is something with this name already out there. As a matter of fact, we have one. But it’s more like a flexible bottle holder than something you can control. What I really need is something connected to you that would cradle a baby around your body, freeing up your two real arms. Things like slings and Baby Bjorns come close, but don’t position the baby in a way that makes feeding or caring for him possible.

2) The Starbucks bottle washer. Sure you can wash bottles by hand, but when you’re dealing with two times the normal volume of formula preparation, feedings, and cleanings, the job gets overwhelming…quick. What I envision here is a device that connects to the kitchen sink with a Christmas-tree shaped rotating brush that dispenses soap and water and spins like the Tasmanian Devil when the bottle is held over the device. In a few seconds, voila…a clean bottle that’s ready to be sterilized and reused. The closest thing I’ve seen to this concept is the pitcher washer at Starbucks that the baristas use to clean out their containers. (Like how I got a coffee reference in another blog? 😉 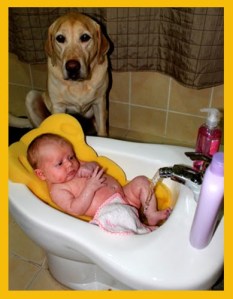 Even the dog knows this doesn't look right.

3) A baby bidet. Do I really need to explain why? Yes, the Diaper Genie has made diaper changes slightly more tolerable, but again – twice the feedings equals twice the poop. Enough said. And, of course, any proper baby bidet wouldn’t be complete without the corresponding diaper-changing robot.

4) A Baby-to-English translator. Nothing breaks your heart more than when you know your baby is in distress but you can’t figure out the cause. That’s why the military uses recordings of babies crying as a quasi-torture technique. There’s something hard-wired in our DNA that forces us to act when we hear that sound. But what if we actually could know exactly what was going on in that little head when they can’t express it? Hey, Apple, there should be an app for that.

5) A female-shaped harness thingy. OK, I admit this one is a little crazy, but it’s not about some weird cross-dressing fetish. One of our twins, I won’t say which one, seems fully comforted only when mommy is holding her. Actually, mommy is preferred, but apparently any woman will do. If I try to soothe her or hold her for more than a few minutes, she fusses for someone else. Am I doing something wrong? No. My physique apparently just won’t do. To test this, I rolled up a baby blanket and placed it in, er, a strategic place and attempted to hold her again while she was fussy. Low and behold, she calmed down and fell asleep. I’m sure it’s just a phase that she’ll grow out of eventually, but for those nights when mommy is working or unavailable, it sure would be nice to have another option to stop the midnight madness. Until then, rolled up blankies will have to do.

Don’t get me wrong. Nothing can replace the joy of parenting and raising children. I mean, just look at these faces! But that doesn’t mean we can’t strive to make things easier, right? What baby products do you wish existed?

Posted by Jeff Brody on December 15, 2011 in Family, Thoughts