Or, more accurately, I found that the hound had been found.

Not a day goes by where we don’t hear about the perils of social media. PR disasters. Missing children. Bad judgment leading to getting fired. Clearly, the socially-enabled world can be a double-edged sword.

This is Pete, a cute little Boston Terrier. Although I’ve never met Pete, I know he belongs to some friends who live in an adjoining neighborhood. 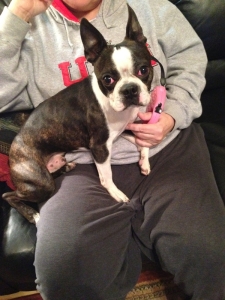 This is Pete, a Boston Terrier.

When I saw a post on my Facebook wall that Pete had gone missing a few days ago, I was concerned (who doesn’t hate seeing a missing best friend) but I didn’t really know how to help. Especially since Pete was not wearing a collar or microchip. 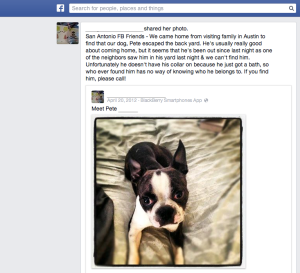 Who doesn’t feel terrible when they see a pup go missing?

Then, this morning, I saw another post. This one in my neighborhood’s community site, which said that a small Boston Terrier was found by a neighbor on my street. Apparently Pete got spooked by the New Year’s fireworks and ran out of his back yard, into our neighborhood.

Then I saw this message on our neighborhood’s community website.

When I read this, I knew that Pete was safe. Luckily, I had seen both posts and immediately connected the dots. I contacted my friends and they came to pick up Pete. Reunion complete, and happy families all around.

A simple example of successful social connections, to be sure. But this time, social media came to the rescue!

Posted by Jeff Brody on January 2, 2014 in Family, Random, Thoughts

Are cars all smoke and mirrors?

I’m not talking about mufflers and rear-views.

It’s hard to imagine where we’d be today if not for the invention of the automobile. The car is truly a marvel of technology and innovation, and it’s hard to underestimate the contribution it’s made to civilization. 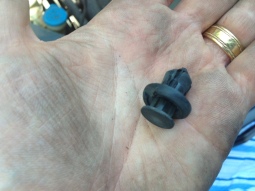 The bumper is held onto the vehicle by eight of these push-on clips on top and eight more on bottom, plus 2 bolts.

I’m certainly not a mechanic, and I’m sure that the drivetrain and chassis of a modern vehicle is solid and safe. Yet whenever I do minor repairs or install something new, I’m amazed by just how little material is actually holding the whole thing together. Even auto brands that are known for safety and quality give us vehicles that are surprisingly reliant on plastic pieces that snap into place and are held together by more plastic clips.

To wit, today I replaced the headlamps on our 2005 Honda Odyssey…not the light bulbs, but the entire front headlight assemblies. This job wasn’t difficult, but it was eye-opening. To start, I had to remove the front bumper – which seems like a big, heavy project in itself, right?

The bumper is a single piece of soft, molded plastic.

The bumper itself is a hollow, single piece of molded soft plastic which covers a steel beam attached to the chassis. To remove the bumper, you simply pop out eight plastic clips on top, eight more on bottom, and one bolt on each side. That’s it. The whole bumper then peels off the front of the vehicle effortlessly.

Then, to remove each headlight, you only need to disconnect 4 bulb wire attachments, and unscrew three bolts. The assembly comes right out, and the new one fits easily in its place.

Putting the bumper back on the car is as easy as it was to remove, simply reversing the steps.

As if looking out for the other guy wasn’t enough to worry about on the road.

So just be careful out there, friends. And remember that luxury vehicle you’re riding in might just be held together by 10-cent plastic clips.

Well, at least we have new headlights.

Posted by Jeff Brody on August 3, 2013 in Random, Thoughts, Travel

It’s been quite awhile since I’ve posted a blog. Having twins under two years old has a way of doing that to a guy. While alls well on that front, it’s time to write again.

And what do I write about when it’s time to write? Well, writing. Specifically, my mom’s writing. My mother’s first novel, a psychological suspense entitled Twisted, has been published and is now available for purchase on Amazon, Barnes and Noble, and Kindle, among others.

If you’ve spent any time in the writing world, or know anyone who has, you know how incredibly difficult the process is to get your work officially published. My mom has been at it for years with weekly writing groups, conferences, manuscripts and discussions with editors. For a publisher to take a chance on a “new” writer is third-party validation that your work is worth doing. It also — and perhaps most importantly — means the publisher thinks they can make money off your work.

So it’s a great accomplishment. And now it’s time to do your part to help. Download a Kindle version, or buy the paperback for yourself. Read and post a review. And if all goes well, look for the next book someday soon by Marjorie E. Brody!

Kids these days. Who needs an MBA anymore when you can just open your own business in the garage?

My 10-year old son has taken the concept of a neighborhood lemonade stand to another level. Only this time he’s not donating proceeds to charity. He’s in business for himself.

Along with several other committed kids in the neighborhood, he’s created a bike repair service called Opie’s Bike Repair in our garage. As the “general manager,” he pays the other kids a “salary,” which we’ll get to a little later.

Most of the time they spend sitting in the garage, waiting for the phone to ring or a random customer to happen by. They’ve made a bit of money doing various bike jobs for friends and family, and they’ve reinvested it in the company, after paying out expenses.

Understanding the need for additional customers, they’ve started marketing with a website, created special offers, and plastered flyers all over the neighborhood. Recognizing there is a limited potential market for bike repair services in our neighborhood, they’ve recently added car washing to the menu of Opie’s services.

And they’re already getting a taste of labor disputes with the employees (a.k.a friends) demanding to be equal partners in the enterprise instead of specialists hired to do a job. As a result, my son sent a memo to the staff requesting feedback on how to make work more fun, via anonymous notes dropped in a mailbox. Employee engagement 101!

As a parent, it’s a fine line between encouraging enterprising behavior and being the voice of reality. For example, when they wanted to add a new phone number for the business, I told them that would cost around $30/month, which they didn’t realize. Of course, that’s not in their budget and so the news was hard to take. On the other hand, they’re learning nothing in life is free and you have to work hard to make something succeed. It’s difficult not to just tell them how to do things, because I want them to have some success. After all, isn’t this how Bill Gates and Mark Cuban and Steve Jobs got started? I’m just hoping the friendship dynamics on the street don’t get permanently bent out of shape while they figure it out.

What’s amazing to me through all this is that the lessons my 10-year-old is learning are on some levels the same ones any small business owner learns. And I hope that the experience he’s gaining today will help him succeed in the future. By the time these kids get to college, business degree curriculum is going to need a major update.

But, until then, the next time you have bicycle in need of repair or a car that needs washing, remember Opie’s, just down the street.

Posted by Jeff Brody on August 20, 2012 in Business, Family, Thoughts 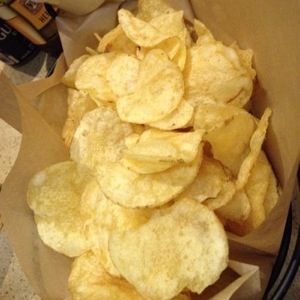 ← Older posts
Journeys with Jeff
Create a free website or blog at WordPress.com.